11 billion years of expansion of the Universe revealed!

The Sloan Digital Sky Survey (SDSS) has just published a comprehensive analysis of the largest three-dimensional map of the Universe ever created, reconstructing the history of its expansion over a period of 11 billion years. The CPPM and LAM teams of the Cosmology group of the Institute for the Physics of the Universe are deeply involved in this scientific and technical feat.

The "Extended Baryonic Oscillation Spectroscopic Survey" (eBOSS) program is an international collaboration of more than 100 astrophysicists and is one of the major observation programs part of the SDSS. On Monday July 20th, building on 20 years of observations, the eBOSS collaboration published a comprehensive analysis of the largest three-dimensional map of the Universe ever created. This map allows the history of the expansion of the Universe to be reconstructed over a period of 11 billion years, providing unprecedented leverage to accurately quantify the acceleration of this expansion over the past 6 billion years. This acceleration is sometimes attributed to a mysterious Dark Energy. Furthermore, comparison with the measurement of the expansion in the early ages of the Universe using Planck satellite measurements reveals a disagreement of about 10% on the estimate of the Hubble constant. This result raises high hopes in the coming years for identifying new physics at cosmological scales. 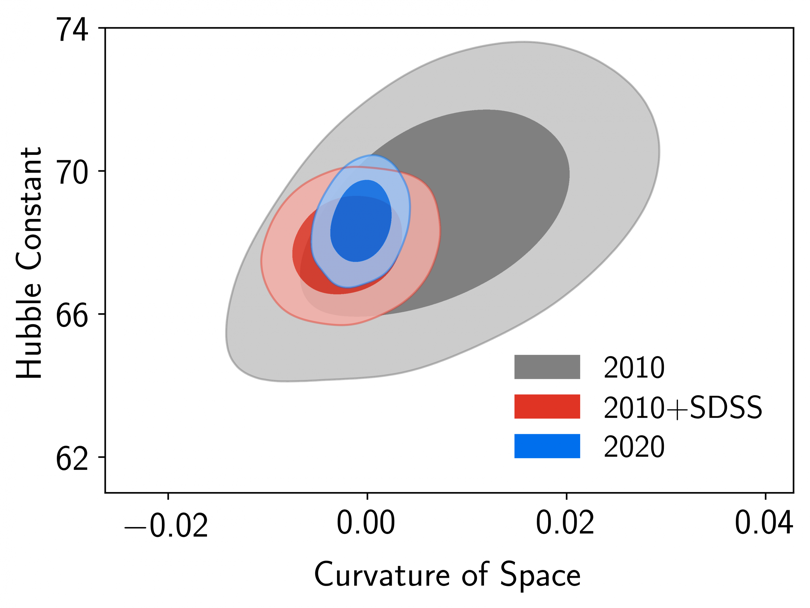 © Eva-Maria Mueller (Oxford Univ.) and SDSS - Illustration of the impact of eBOSS and SDSS on our understanding of the rate of expansion and the curvature of the Universe over the last twenty years. The region in grey shows the state of our knowledge 10 years ago, and in blue the current state. The region in red illustrates the impact of SDSS alone in improving this knowledge.

The harvest of new results, published in more than twenty papers, includes detailed measurements of more than two million galaxies and quasars, as well as thousands of cosmic voids and gas surrounding them, giving rise to the most accurate map of the Universe. These new results come from an international collaboration involving teams from CEA, CNRS and AMU.

This work has been supported nationally by the French National Research Agency (ANR) and locally by A*MIDEX, in particular through the OCEVU Labex and now the Institute for the Physics of the Universe (IPhU).

Video rendering a 360° visualization of the results (click on the picture to start) : 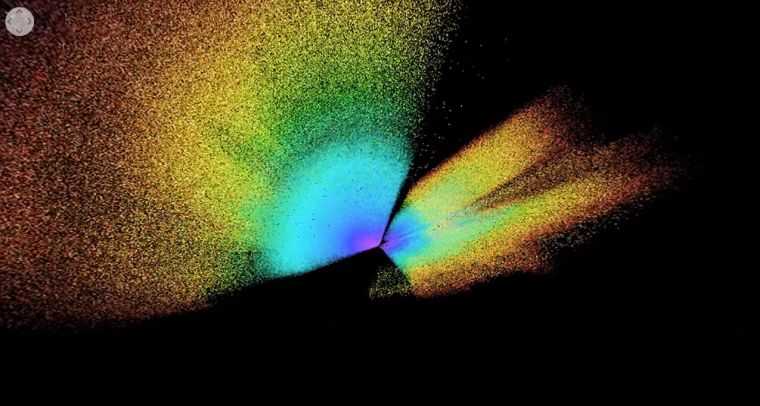